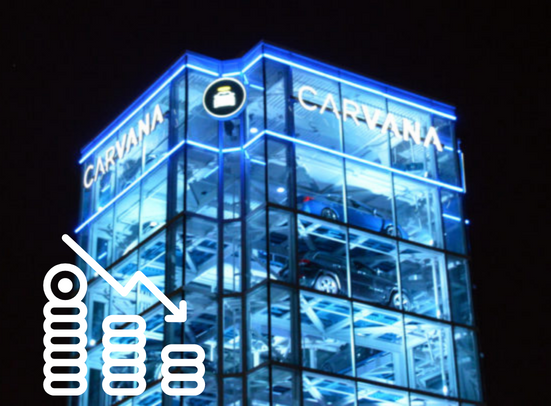 The storm does not cease for Carvana.

From being one of the most successful companies during the covid-19 pandemic with impressive growth, today, the sun doesn’t want to rise for Carvana.

Carvana, founded in 2012 in Arizona, used favorable conditions to promote its flashy car vending machines and a new way to buy a car. The car vending machines performed wonderfully during the height of the pandemic when consumers wanted to avoid contact in any way possible to avoid exposure to the virus.

Today the losses are no secret.

But why did Carvana’s stock plummet?

It is not normal for a stock to go from trading at $300 to single digits in a year.

Morgan Stanley analyst Adam Jonas reported that he was withdrawing his $68 price target for Carvana and that the company could now be worth as little as $1 per share. This new price is a result of the poor financial results obtained by the company together with the current economic scenario in which the used car market is falling.

The used car market continues to worsen. The central bank is aggressively raising interest rates and inflation is at its highest level in 40 years.

From an operational point of view, this has caused used car prices to fall sharply, down as much as 15% from their January peak. High rates make it more expensive to finance a car, while inflation erodes consumers’ purchasing power.

This caused the situation of Carvana, which due to high losses, took on $3.3 billion in debt to finance the acquisition of the physical auction business of auctioneer Adesa this year.

Carvana has found it necessary to borrow money to cover its losses constantly. Not to mention that they have borrowed money in the past for growth objectives as they financed.

The most disturbing part of the earnings report is the amount of cash the company has spent. Carvana’s cash and equivalents totaled $1.05 billion in its second quarter this year, leaving it with just $316 million.

The company came under fire for the large sum of money it spent on marketing and even more for a disappointing Superbowl ad. Carvana has spent too much money at a difficult time in the economy.

Carvana is trying to turn things around and avoiding as much as possible acquiring equity or adding more debt. So the company has decided to cut costs radically. After cutting 2,500 jobs in May, it plans to announce a further wave of layoffs affecting 8% of its workforce, or 1,500 employees.

The new layoffs will affect technology and corporate teams, adding to these operations teams where roles, locations, or shifts will be eliminated to adapt their size to the current environment.

What will be the future of Carvana?

We are still determining if Carvana will become a $1 stock. Could the company bounce back when the economy stabilizes again? One can only hope that the used car retailer will pilot this difficult economic time it is currently in. The short-term position does not look fruitful for the company, with massive sales continuing as it tries to regain investor confidence.

One silver lining in the clouds is that they should not expect this storm to last forever. The Fed could control inflation and regain the flexibility to lower interest rates as needed. But what is unclear is whether Carvana can last that long. Morgan Stanley analysts give it a worst-case price target of $0.10 per share, and 40% of its outstanding shares are sold short, highlighting significant market pessimism about the company’s future.

Want to know more about the latest stock market news? Visit our MarketMoversReport site to stay up to date on all market movements.