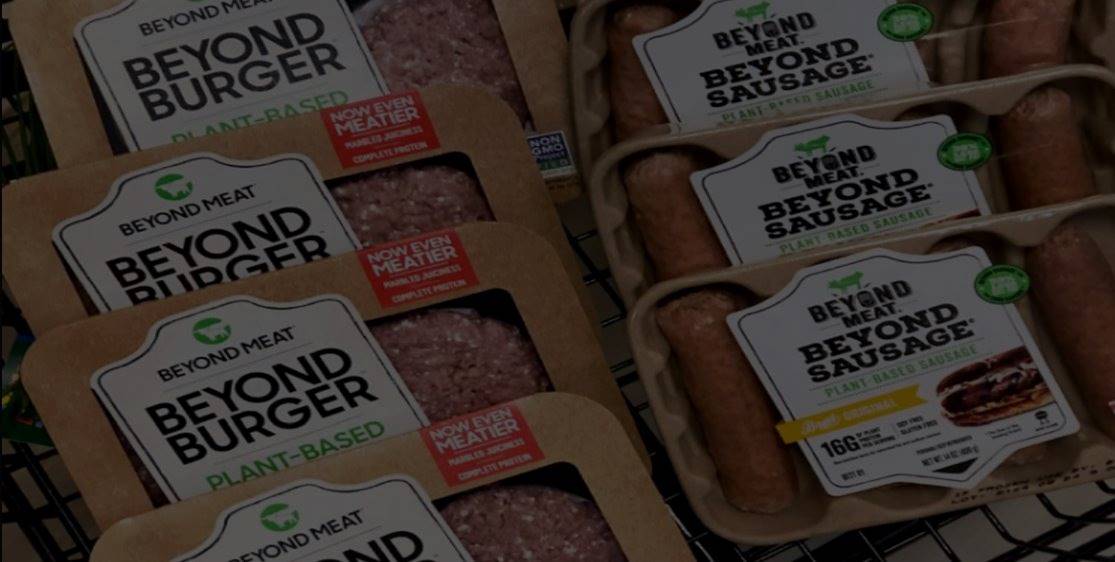 Bearish positions with my first two targets being Caterpillar and Deere

Yesterday, I discussed how I was starting to seek out some bearish positions with my first two targets being Caterpillar (CAT) and Deere (DE).  They both opened lower and I don’t want to sell into a recent low — so I’m patiently waiting to initiate a short into CAT if it rallies to the $218 level.

Another name I’m targeting for a bearish position is Beyond Meat (BYND), the maker of plant-based protein or alternative meat products.

The company reported earnings last Thursday, and the numbers were terrible across the board; it missed big on top and bottom lines, with margins and market share down sharply, lost to its competitor,  Impossible Foods.

[Special Offer] Claim Your Trial Membership to the Options360 for just $19!

The stock initially tanked some 15% ($20 to $127).  Full disclosure: I took a bearish position prior to the report (and recommended the same to Earnings360 members).  However, my initial joy quickly turned to sad disbelief as the very next print was $35 higher near at $165 per share!  The market-moving news was BYND has ink agreements with both McDonalds (MCD) and Yum (YUM).  What I thought was going to be an overnight 200% profit turned into a small loss.

But I digress. As the market and I began sifting through the terms of those agreements, there was less than meets the eye.  Neither is an exclusive deal (both MCD & YUM are working with other companies such as Impossible Foods) to promote Beyond by brand name; MCD actually issued a release clarifying the limited scope of the agreement.  The stock finished the day up just $1 at $145.  I couldn’t salvage my earnings trade. But, it has me on the hunt for a longer-term bearish position.

The fact is Beyond Meat products may be positioned as environmentally healthy for the planet, but it’s patently unhealthy for the human diet; they’re heavily processed and contain more saturated fat and double the sodium than beef.

Get everything the Options360 Service Has to Offer for just $19!

The shares have been on a steady slide since the earnings report — now below $140, which has been frustrating but confirms my bearish thesis.  I’ll be looking to initiate a bearish position against the $145 resistance with a target to take out to the double bottom $115 lows hit in November and earlier this year.

While I’m waiting for CAT and BYND entry prices, my concern over the recent market action had me move to establish some broader downside protection via index products.  Specifically, I bought a bearish put spread in the iShares Russell 2000 ETF (IWM).  The reason I chose IWM is it’s shown very good relative strength as there has been a distinct rotation from high-tech growth to value.

Past two weeks Nasdaq decline some 5% while IWM is down just 0.05%

IWM has benefited as it’s composed of more cyclical sectors such as energy and financial companies leveraged to re-opening.  Over the past two weeks, the tech-heavy Powershares Nasdaq (QQQ) has declined some 5% while IWM is down just 0.05%.   That rotation is persisting today.  At midday, the IWM is up 1% while the QQQ is down 1%.  This is one of the largest daily dispersions between two broad ETFs in over 10 months.   I think we’re close to this rotation running its course and expect IWM to have a short-term pullback.

Reasons I think the IWM reverts lower in the near term

One of the reasons I think the IWM reverts lower in the near term rather than the QQQ resuming its uptrend is because of the economic recovery, the stimulus, and the potential for an infrastructure deal now fully priced in.

Also, an interesting Bank America report has one of its quantitative models hitting a sell signal for the first time since 2007.

Essentially, it signals that 14 years later, Wall Street is finally fully embracing the bull market.  It’s a contrary indicator and as the recent sell the news on good earnings reports suggest, things got as good as they’re gonna get.  Even as Main Street rebounds, expect Wall Street to become a more bumpy road.

[Last Chance] Don’t Miss Out On The Next Double-Digit Winner! Grab Your Trial Membership for Just $19

The post Why I’m Targeting a New Trade in This Popular Food Products Stock appeared first on Option Sensei.